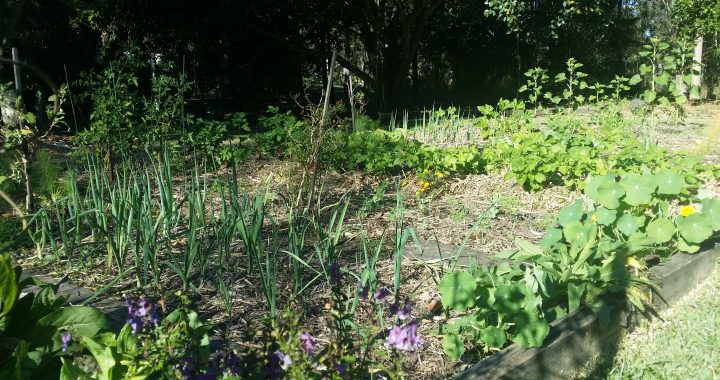 Before getting into the detailed suggestions, here are some over-riding principles for your vegetable garden paths:

Ratio of bed and path widths

A 30cm path width is certainly wide enough to walk along one foot at a time and to work on the beds. The main advantage with narrow paths is that you can allocate more of your vegetable garden space for food production within the beds. With a bed width of 80cm and path of 30cm, the ratio of path to bed is 37% and if the beds are 1.2m to 30cm paths, the ratio improves to 25% so you get an extra 12% of growing area and 12% less area of paths to manage. Thus more efficiency of space.

Its interesting to note that conventional market garden vegetable beds vary from 80cm to 2m wide, with path widths up to 30cm. The bed and path widths are largely dependant on the size of machinery used for cultivation. If you have a smaller organic garden where you work with your hands, then designing around the size of machines is not needed. But, regardless of the size of the food growing area, if you want to maximise growing space, minimising path areas. In my own vegetable garden, I have 80cm wide beds, easy access around the garden edges and 30cm wide paths.

Commercial market gardens normally have cultivated paths (soil) which require constant weeding (with machines or lots of labour) and such market gardens will usually not have fixed beds so the paths keep moving with the cultivation. Thus the paths, compacted by machinery, end up being cultivated into the next crop. This makes it harder to keep to soil quality high, due to compaction and soil disturbance.

Grassy paths – The benefits of having vegetable garden paths in grass are many:

I think these benefits far outweigh the two main disadvantage which are:

For a larger market garden space, blocks of beds, say 10-10m or 10-20m gross area with grassy paths between the blocks of at least 1m wide for vehicle access and then paths within the blocks of 30cm works well at efficiency and access.

Cardboard and newspaper – The advantage with these materials is that they recycle paper and can stop weeds. For me, this does not offset the disadvantages which are: they look messy, not easy to uniformly fit path spaces, not easy to walk on, break down into substances that include chemicals and will need renewing after a relatively short period of time

Wood chip mulch – This does break down into soil over a very long period of time, much longer if its hardwood. It will stop weeds for a period of time until they find their way through and will aid with beneficial fungus in soil. Some disadvantages are: can create fungus that is not beneficial, is not easy to walk on, is slow to break down and can be acidic for surrounding soil.

Grassy mulch – I have used this for my narrow paths and it works well as its easy to walk on, has no chemicals (if its organic mulch), forms easily into paths and when it breaks down after 4-6 months you can shovel the path onto the beds to build up soil.

Crusher dust (granite) – This works incredibly well at aiding soil fertility and because of this weeds tend to grow through it fairly quickly. I have seen plants growing on edges of crusher dust beds grow like crazy compared to other plants in the veg beds.

Bricks, tiles or stones – Quite labour and materials intensive to create, but very durable and can be done to greatly enhance beauty in the space.

Exposed soil – Promotes weed growth, does not drain well, leaches out minerals, soil carbon and soil life. When it rains the paths get muddy and cannot be walked on. It is strange that with all these disadvantages, such paths are most commonly used in commercial market gardens, but that’s what happens when food growing is designed around machines.

I have used all path materials/mediums above in my many years of vegetable gardening (ah yes, carpet is another one). From all this experience, I feel that for a reasonable sized vegetable garden, use grassy paths for your service paths and use mulched paths for your “between bed paths”. If you have a bunch of timber or metal raised beds, used grassy paths between them. For a larger market garden space, experiment with a portion of your garden using permanent beds and grassy paths. I think you will be pleasantly surprised.

Lastly, we have many clients where we design their food growing spaces. We work with a number of the paths described above, check out our organic garden coaching service.  We do it face to face in Brisbane and via video skype elsewhere in Australia.